Screens will continue to use iCloud by default for saving your saved screens but now allows you to use Dropbox to synchronize them.

Some of our users prefer to buy Screens for Mac outside of the Mac App Store. Unfortunately, iCloud isn’t available for those users so wanted to offer them a way to synchronize their saved screens and Dropbox is a great alternative.

You can select which method you prefer from the app settings: 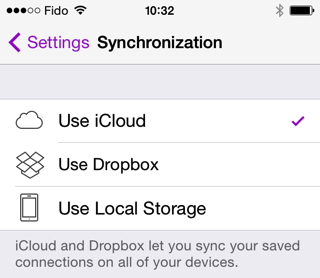 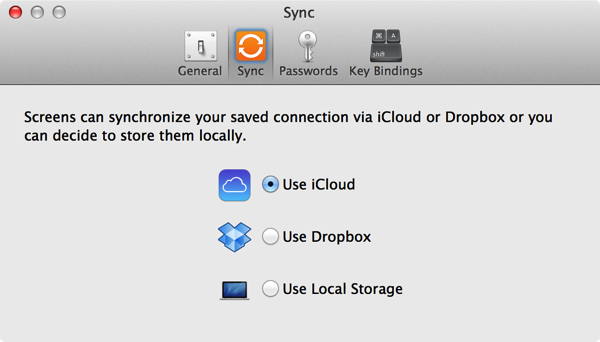 Of course, we’ve added some new features and improvements for both apps:

Screens now handles Macintosh User Authentication without passwords more gracefully. It will only prompt you once and remember that your user has a blank password.

Screens won’t use an SSH password as a VNC password if it is associated with an SSH key.

You can now hide the Screens icon from the Dock.

We added a ‘connected’ indicator in the Library window when Screens is connected to a screen.

Screens will now try to reconnect automatically when the remote computer has closed the connection.

Middle-button mouse clicks can now be triggered with the ‘fn’ key and a left-button click.

Finally, we added Italian and Dutch localization. Spanish will follow in an upcoming minor update.

We were in San Francisco last week during WWDC and we are pretty excited about what Apple has announced during the Keynote and throughout the week. And you should too: both are major releases not only for us developers but for you, the users.

You could tell that something was different and that it was the beginning of a new era, one that does not include Steve Jobs. By that, I mean that it is the first time since he has passed away that you would not feel his direct influence. Tim, Craig and everyone during the Keynote felt comfortable and had genuine fun; they are now running the show. Apple will remain true to its culture but things will be different and quite frankly, it’s very refreshing. The overall atmosphere was very positive, something that was not as palpable during the last WWDCs.

On our end, we’re starting to work on Screens 3.5. To make things less complicated, Screens for Mac’s version number will be bumped from 3.1 to 3.5. We will also try to synchronize our iOS and OS X releases when it makes sense to do so.

We have some great new features planned for you and we will hopefully launch both apps around the same time as iOS 8 and Yosemite ships.

We’ll tell you more later this summer so stay tuned!