Finally, version 2.1 is now available for all 3 Screens products, right on time before WWDC! We took longer than expected to release this milestone because we wanted to make sure we covered many tasks on our list and we hope you’ll enjoy what we’ve done with our apps!

For 2.1, we’ve added a feature that many of our users have been requesting for a long time. This new feature lets you see what’s happening on a remote computer but won’t let you move the mouse cursor around or send keystrokes. You can still pan or zoom the displayed screen but no commands will be sent to it.

This is a great way to spy on your significant other! (seriously, don’t do that!)

To regain control of the remote computer, you simply tap on “Control Mode”: 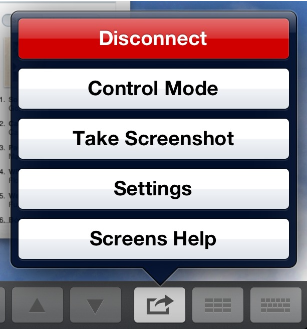 Screens (iOS and Mac) now supports SSH Keys that include passphrases. If you were waiting for that feature I guess you can rejoice now!

There are many other improvements in version 2.1, such as:

Screens for iOS is available for $19.99 on the App Store

Another feature that was often requested was the ability to customize the public port settings. This will let you use Screens Connect even if UPnP or NAT-PMP is not supported by your router.

Oddly enough, this feature was part of version 1.x but got removed in version 2.0. The reason for that is that it would confuse many non-tech users and ended up doing more harm than good. So we decided to remove that feature but, thanks to the insistence of many power-users, we brought this feature back in version 2.1: 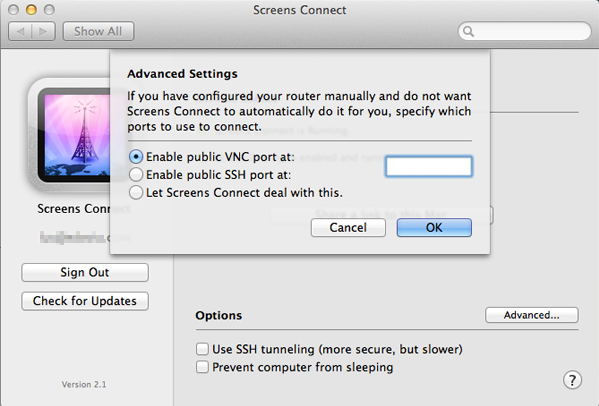 We feel that this feature should now be less confusing for everyone.

Note: The Advanced mode is currently not available in Screens Connect for Windows.

Screens Connect is available here or click the “Check for Updates” button in the preference pane.

Unfortunately, Screens for Mac is still under review by Apple. We will release it as soon as it has been approved, hopefully in the next few days.

Update: Great news! Screens VNC for Mac has been approved by Apple and is now available on the Mac App Store

You can hit ⌘L, go through the Screens menu or just click on a screens:// URL to open it up in Screens. See the updated documentation for more details.

Like its iOS counterpart, Screens for Mac includes many improvements in version 2.1:

Screens for Mac is available for $29.99 on the Mac App Store

For more information about Screens and Screens Connect, visit http://screensapp.com.